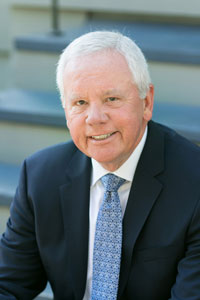 Jim Naff joined Smith, Bryan & Myers (SBM) in 2005 as an affiliate with James A. Naff & Associates. Prior to joining the firm, he completed more than 33 years of government service for the State of Florida.

Jim began his state government service in 1971, which included 10 years with the Florida Department of Agriculture and Consumer Services, where he served as the deputy commissioner, as well as the legislative affairs director, overseeing numerous divisions.

Subsequent to that service, he spent four years with the Florida Department of Citrus, where he was assistant executive director for Administration. In this position he directed the federal and state legislative affairs operations.

Since joining the firm, he has been very successful in the appropriations process where he has secured millions of dollars of state funding.

Within SBM, Jim’s responsibilities include:

Jim attended Valdosta State College, where he received a Bachelor of Science in Business Administration and Marketing. Jim and his wife, Jen, live in Tallahassee.